The stock markets are swinging wildly now not knowing which direction to head in.  At 15,800 levels of the Sensex it currently looks  very shaky – which it has been for long- and it is likely to hover between 14,000 and 17,000 levels for a while. What is more interesting than the movement however, is the reasons that are offered by the media and so-called expert commentators every time the movement happens either way.
So let us say you are a rookie financial journalist and are assigned to write about the stock market movements every day.  How are you going to justify wild daily movements based on macro-economics and fundamentals?  These things do not change on a daily basis!  But never fear, public memory is short. It is so short that they forget what you wrote yesterday. So all you need is a menu from which you pick. Let us try to construct such a menu to help our rookie reporter.
First, start with the US situation.
The negative outlook for the US is as follows:
The US economy is not yet out of the woods. Unemployment is still high, which is because jobs are not coming back to the US manufacturing sector which is still in the doldrums. Blue collar jobs are increasingly scarce in the US and those jobs are the core of any economy.
Housing starts have not recovered to levels existing when it was boom time. House prices are still not back to early-2008 levels and a lot of people still have mortgage balances that exceed the value of their properties.
Budget deficits are still high, and any attempts by the politicians to cut spending is only rhetoric. When they talk of cutting 50 billion dollars it sounds big, but on a base of trillions, it is not even a decimal point.  Unemployment benefits and healthcare costs are ballooning.  About dollar three trillion (not confirmed – our reporter can check and put the number here) of treasuries are held by outsiders, of which the Chinese government is a significant third.
Policy making is paralyzed. Barack Obama is seen to be increasingly ineffective and it not able to push through anything of significance by way of much needed reforms.  The US is already into the election cycle. Elections are due in November, so in any case do not expect any hard initiatives to come out of the government now.
QE 1, 2, and God knows what other QE have shown no signs of having any impact. Money at near-zero rates has an unanticipated effect of restricting lending. This is because  the rates were reduced since there is an increased perception of risk in the market place. The perception of increased risk has resulted in the banks being unwilling to lend! So the money is being diverted to driving up commodities and asset prices across the world. And, paradoxically, buying back US treasuries. It has still not resulted in high inflation in all fronts – there are signs everywhere of inflation firming up but it is too early to say that the QE’s have resulted in inflation – but that could happen as well.
The world is, currently, to put it mildly, in deep shit. At such times, all money flows back to “safe havens”. Paradoxically, US treasuries are considered a “safe haven”! Currently lot of money is flowing back into US treasuries. This has a negative impact on markets across the world since money is being sucked out of other assets and is finding its way back to the US.  With the European situation being what is it is (more on that in the next article), it is increasingly certain that the dollar is going to be the reserve currency for a long while to come. The Chinese, the Russians, and all other kinds of people are not going to like that, but that’s the way it is. The current depreciation in the Indian rupee is also due to this reason.
The US situation commands an inordinate amount of attention when it comes to analyzing the world economy since they are the world’s biggest consumers by far, both on an absolute and per capita basis. When the US catches a cold, the world sneezes, and for some time now, uncle Sam is a sick man with flu, so the world is having repeated sneezing bouts.
Our  rookie reporter is happy. He has a good menu of negative news that he can twist and turn around in various ways to make his recipe for the day. He also happens to have passed out from a good reporting school where they have taught him how to make reports look impressive by putting graphs and charts of important looking statistics. Like this:
———–
Extracts from an Associated Press article:
A surge in apartment construction gave home builders more work in November. And permits, a gauge of future construction, rose largely because of a jump in apartment permits (sic!). 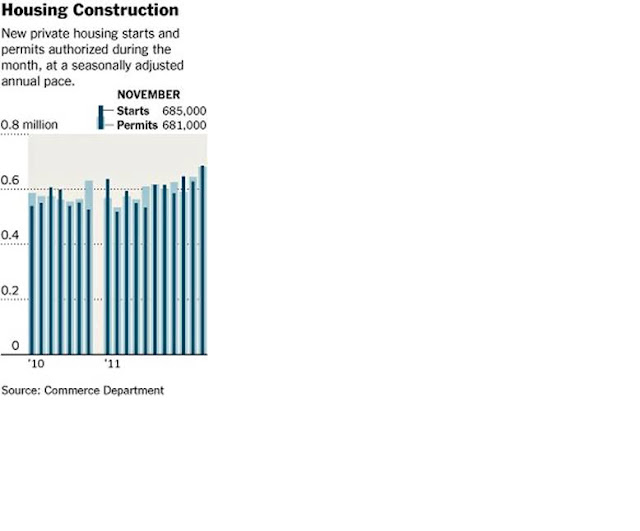 The New York Times
The rise in permits provides hope for the housing market, though 2011 is still shaping up as one of the worst years in history for home builders.
Builders broke ground on a seasonally adjusted annual rate of 685,000 homes last month, a 9.3 percent jump from October, the Commerce Department said Tuesday. It was the highest level since April 2010. Still, the rate is far below the 1.2 million homes that economists say would be built each year in a healthy housing market.
—————– end of extract – you can google for tons more of stuff like this —–
As you can see, the beauty of the above statistics is that it can be quoted in any context, to justify a rising market, or a falling one. It looks impressive, and there is a mass of numbers which no one understands.
The rookie, being a modern day kid, also knows how to google well. And his newspaper has a research department to boot who can provide him tons of stuff like the housing starts statistics quoted above.
All right, since we are constructing a menu, what about positive news on the US economy?  You need that to justify a rising market.  So here goes:
The US economy is coming out of the woods. Unemployment is still high, but there are positive signs of recovery in the job market.  The companies which were almost bankrupt and on the verge of closure a couple of years back, are doing fine – take for example, General Motors, Citibank.  Consumer credit off-take is increasing and people are flocking back to the stores once more. The Christmas season just gone has shown a huge increase in consumer spending which is being interpreted as a very optimistic sign by the markets. (Author’s note: I have no clue if this is the case, but if the markets go up, I can say this and have enough statistics to back it up).
Housing starts are recovering.  Housing starts
are a leading indicator when it comes to the US economic situation. As to statistics and further comments, the same extract given above, with slight editing serves the purpose of justifying negative as well as positive news.
There is a focus on reducing budget deficits; however, with the economy currently not yet out of the woods, it is expected that the deficits will continue for a while. Some measures being taken now are likely to yield results in future – the trend is in the right direction, since there is a realization that one cannot run an economy perpetually on a deficit. In the meanwhile, economists  are certain that following the Keynesian model of fiscal stimulus is the way to go now, which means that budget deficits are good (Note: if this sounds confusing, welcome to macro-economics!)
All the QE’s at last seem to be having some kind of impact. The economy is on a recovery path.  They seem to have put the steam back into domestic consumption and, as everyone knows, more consumption is what an economy needs.
With the Euro showing signs of extreme weakness, even possible collapse, the dollar is back to its reserve currency status. And the world goes on meandering as before…
The rookie by now, is very very happy. Depending on whether the Indian stock markets go up or down, his “US economy” menu for any eventuality is ready.
We need to give the rookie some more menus as well – like say, Europe, rest of the world, Indian macro-economic situation, etc. But we shall leave those for a later article!
By
Dinesh Gopalan
(posted to my blog: http://www.dineshgopalan.com )