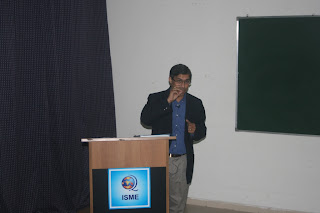 Mr. P.V. Ananthakrishnan, CEO and India Country Head of Mashreq Bank gave a talk on “Banking (past and future)” on 17th December, 2010. at ISME, Navi Mumbai campus. Mr. Ananth walked through the evolution of banking sector and expressed his confidence on the growth prospects of India. The session was followed by Q&A where in students discussed with Mr. Ananth on various aspects of the banking industry.

Mr. Ananthakrishnan is a seasoned banker with over 28 years of experience having worked in various banks including Public sector, Pvt.sector and foreign banks

He worked with HDFC Bank Ltd for close to 13 years, where he was Executive Vice President heading various Business groups. He was instrumental in starting the Commodity Business group in HDFC Bank which is today one of the well run businesses of the bank. He also created the Capital Market business for HDFC Bank, where HDFC bank is today a market leader.

Mr. Ananth has traveled across the country and overseas and he is a regular speaker at various seminars, programs and conferences. He also provides guest lectures at various institutes including NIBM/RBI training college.

He was also one of the Core members of the Govt. of India- Ministry of Consumers affairs formed committee, which dealt with the WAREHOUSE DEVELOPMENT AND REGUALTION ACT, which was finally passed as an act by the Parliament.