On 7th January, 2011, a guest lecture was arranged  by  ISME, Bangalore  in which the guest speaker  was  Mr. A.N Chandramouli  of  StarragHeckert, India.
Mr.Chandramouli is currently heading as Managing Director of  StarragHeckert  Machine Tools  Pvt. Ltd., which is a green field venture of StarragHeckert from Switzerland, with plans for establishing market and subsequent manufacturing of  StarragHeckert Products such as advanced precision milling machines from Switzerland and Germany into Aerospace, Energy and other related fields in India.  Prior to this Mr.Chandramouli  has worked as a CEO of  Makino India Pvt. Ltd. which is a Japanese company located in Bangalore into metal cutting and manufacturing technology.  He comes with a decade of  wide and varied experience in the corporate world. 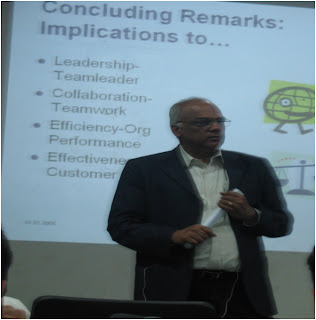 The topic which Mr. Chandramouli delivered a lecture on was “Team Building Skills”. Having worked in various companies and with many teams, he  has the practical knowledge and experience about   how teams work in companies. Through his lecture he tried to inculcate into us the various skills and techniques required for forming a team and leading it.

He provided us a framework of what “team dynamics” is and stressed on the fact that team building skills are heavily in demand in today’s corporate environment. His presentation  exposed us to the different types of teams existing in companies and also explained the concept of team building pyramid.
He demonstrated the essence of  team building through stories of the “Hare and the Tortoise” and “The Geese” which was entertaining and at the same time very educating. Then he talked about the key roles which an individual has to play in a team and the skills that are needed for those roles thus giving us an understanding of  “team work”  in the corporate world.
He also threw light on Leadership abilities as a key aspect in team building. He gave examples of some famous leaders like MK Gandhi , Dirubhai Ambani , Narayan Murthy, Ratan Tata  and told us according to them what leadership exactly meant .
Mr. Chandrmaouli concluded by  sharing his own practical experiences with us which was very interesting and he left an impact with his charismatic personality and alluring thoughts about team building. He left us with one very nice thought to ponder upon – “to become a leader one has to search for his own core competency”.
Written by Priyanka Joel