The staffing firms in India are rapidly growing and devising methods to meet the hiring demands of different sectors of Industry. The article will briefly cover the issues involved with contract and temporary staffing.

Hiring continues to be a challenging job for Indian industry. In light of the current economic scenario, where the number of graduates outnumber available jobs, most companies are wary to making big investments in training fresh graduates. India continues to be a market where labour cost is relatively low and competitive, which is partly the reason for the success story of IT& ITES sector. However, Indian companies are facing enormous challenges due to rapid rise in the number of technologies and reforms in various sectors, which is compounded due to the shortage of skilled talent pool.
Though the success of Indian industry during last 5 year has been modest, the biggest challenge industry faces is to recruit right talent and retain it. Another challenge, in light of the current economic situation, is to define the size of the work force as projects or orders demand tend to fluctuate. Indian companies are always pondering what to do with the permanent work force when there are no substantial orders/projects. Also, the fact that many industries are working on a shoe string budget, the manpower planning becomes a big puzzle.
Contract/Temporary Hiring
The challenges mentioned above have led to the concept of contract or temporary hiring. The concept per se is not new, as it has been used in the manufacturing and service sector predominantly so far. However, in last decade, there has been a significant rise in the contract/ temporary hiring in the IT & ITES sector.
Contract or temporary hiring basically means the individual (“Z”) remains on the rolls of the staffing consultant and is deployed to work for a company “X’’ say Wipro, Infosys, Accenture, etc. After the term of contract is over (typically 179 days), the company ‘X’ may hire Z depending on performance and availability of permanent positions. Alternatively, the consultant may extend Z’s contract with ‘X’ or deploy the resource to company “Y” on a need basis. The major issue here is much lower pay by consultant and without any other perks or benefits. Even though this arrangement provides high degree of flexibility to companies in planning their work force, it is to some extent leading exploitation of contract employee by companies as well as consultants. This is especially pertinent in the case of fresh graduates as they are paid comparatively low salaries to permanent employee. They have to strive harder, sometimes even take sundry jobs and work extended hours to make an impression on their managers.
Growth of Temporary Staffing Firm
In view of the growth in the temporary staffing sector, many staffing and manpower firms like TeamLease, Randstad (Earlier known as Mafoi), Adecco, Kelly, Manpower, Collaberra, IKYA, etc. have cropped up in India. The majority of them are growing at the rate of 15-20% in spite of economic slowdown. TeamLease within a decade has emerged as of India’s largest temp staffing company with 1400+ clients and outsourced employee base of over 70000 associates. The diagram below depicts the functionality aspect of team lease staffing
Diagram -1 – Temporary staffing arrangement: Team Lease
Consolidation is generally creeping into the highly fragmented staffing industry. During June 2011 Italy based GI group a global staffing firm acquired its joint venture partners 49% stake in Elixir consulting to take its shareholding to 100%. This sector is witnessing the major change and global players are venturing into India to establish presence, and these players would sooner or later get into a bind of acquiring smaller players. 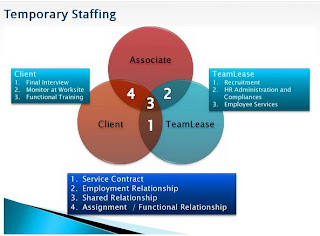 A recent study conducted on the recruitment industry by Ernst & Young and Executive research Association (ERA) estimated the temporary staffing market in India is close to Rs. 17,200 Crore. The report states while temporary staffing is not as big in India as it is in the western countries, it is likely to account for 2.5 to 3 % of the country’s total workforce in the near future, which will be a substantial number considering the size of Indian workforce.
Government Initiative
The tension and exploitative aspect of temporary staffing reared its ugly face in the events which led to the recent mass scale violence at Maruti plant in Manesar. It has been reported that the main cause of the unrest between workers and management at Maruti arose from the disparity in wages between permanent and contract employees.
The leading staffing companies in India have formed a federation called Indian Staffing Federation (ISF).ISF is trying to address various issues related to contract and temporary hiring. At a recently held Indian staffing conclave, presided by Shri Mallikarjun Kharge, Minister of Labour & Employment, Government of India, the two major recommendations submitted by Indian Staffing Federation (ISF) were:
(a) Labour laws in India should be unified and simplified
(b) Best practices and ethics should be enforced within the human resources and staffing industry.
The report submitted by ISF deals with Indian flexi staffing industry. It notes that India is among the top five nations in terms of flexi worker base (which is currently pegged at 1.3 Million, and is expected to grow to 9 Million by 2025). The report further states that “Companies need flexibility to remain competitive, and in the absence of right environment that supports flexibili
ty in an organized manner, work tends to go casual thereby denying the employee a secure job.”
It has also been noted that due to lack of regulation specific to this industry many unorganized players are not following the guidelines of prevalent labor laws. It is being suggested that all,
(a)  Flexi staffing agencies should be registered within a designated central body and should have minimum capital of Rs. 10 Million.
(b) Companies which default on timely payment of wages or statutory dues are debarred from operating in the sector.
Apart from providing a regulatory framework for temporary staffing, the Government should ensure compliance and strictly enforce the laws enacted in this regard.
Temp Staffing: IT Sector
A recent report published in ‘The Financial Express states that after strutting through a year of ups and downs, the IT Sector now prefers contract hires or temporary staff to fulfil its talent crunch as and when it arises. Companies such as NIIT, HCL, Wipro and Capgemini are looking at hiring niche talent for special contracts rather than keeping permanent staff. The rapidly growing trend of contract staffing has given some companies a chance to reduce their budgets and still get the project completed within the given time frame. As competition forces businesses to continually become leaner and more flexible, the importance of focusing on core business has driven the industry to consider and deploy temporary staffing.
The finding by Team lease of the comparative analysis of 5 annual salary primer released between 2008 and 2012 states that “Salaries for temporary jobs are fast catching up with that of permanent ones as more companies look to hire temps. Not only have companies in India opened up to temping as a concept, they have started rewarding talent, skills and longevity irrespective of the macro economic conditions“.
Job Opportunity: Fresh Graduate
The contract/temporary hiring, particularly for IT sector, offers relatively more opportunity to students of Tier 2 and Tier 3 colleges, as high end companies are reluctant to visit such colleges. The trend seems to be that more often than not such fresh graduates get absorbed with a permanent job within 6 months to 1 year from commencement of work. Though the salary offered by consultant is less (sometimes as low as 60% of permanent employee) but in the long run it evens out and provides the advantage to the fresh graduates to get a break-through in the industry. Few companies which follow this model currently are IBM, Accenture, Unilever, Thomson Reuters, Wipro Infotech, IGatePatni etc.