Dr. Shampa Nandi, Faculty, ISME
Introduction
Understanding human behaviour is one of the most complex things. Behaviour varies from one to another, as each person has a different need, motive, perception and attitude. Family, friends, cultural influences and economic influences interact together and shape the four factors in different ways. Another important factor is the surrounding environment of any person which influences his thought, feeling and behaviour. External factors include culture, subculture, social class, social status and reference groups.
Azjen’s Theory of Planned Behaviour (1991)
According to this theory, the best way to predict someone’s behaviour is by asking people if he/she is intending to behave in a certain way. Again, if someone is unable to perform a behaviour, his physical or psychological strength does not allow him to do so, or some unexpected barriers comes in the way, then his intention and actual behaviour won’t match.
As intention can explain behaviour, how can intention be explained? According to Azjen, there parameters help to explain behavioural intention:
1. The attitude (opinions of oneself about the behaviour);
2. The subjective norm (opinions of others about the behaviour);
3. The perceived behavioural control (self-efficacy towards the behaviour). 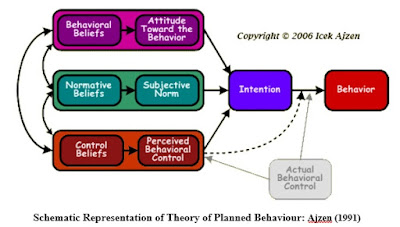 Complexities of Human behaviour can be approached at many levels- starting from psychological processes at one extremes to the influences of social institutions at the other end. Behavioural beliefs is someone’s belief about the likely consequence of the behaviour, which actually leads to favourable or unfavourable attitude toward that behaviour. How the peers, family or friends would accept or approve any behaviour, directly influence us to behave in a certain way. Sometimes we are not sure what to do and seek our surrounding what they are doing and then decide to accept that behaviour. Aizen defined this parameter as “normative beliefs” which results into perceived social pressure or “Subjective norms”. Belief about how easy to perform a behaviour and the factors presents that facilitate or impede performance of the behaviour is measured by the “Control belief” which leads to “perceived behavioural control”.  The more favourable the attitude and subjective norm along with greater perceived control, the stronger a person’s intention to perform the behaviour. Ajzen (2010), described how to formulate constructs to predict the behaviour towards accepting physical activity and exercise behaviour.
Use of TPB model in predicting Consumer Behaviour
A number of studies have successfully applied TPB model to predict behavioural intention and explain individual behavioural intentions and actual self-reported behaviour both from organisational and from consumer perspective. (Chau and Hu 2001, 2002, Gentry and Calantone 2002, Venkatesh and Brown 2001, Brown and Venkatesh 2005).
Brown and Venkatesh (2001) did a two wave longitudinal study on the adoption of personal computer among American homes. To understand the relationship between the salient determinants and subsequent adoption behaviour,   theories from Psychology, Marketing and Information System were integrated to develop a core set of determinants expected to influence adoption and non-adoption of PCs in homes. Innovators and early adopters were driven by hedonic pleasure and social recognition, while adopting PCs in their homes. Early majority was influenced by utilitarian outcomes and got influences by their friends and family members. Late majority and laggards did not adopt PCs because of rapid changes in technologies and high rate of technological obsolescence. Chau and Hu (2002) investigated technology acceptance by physicians by examining their decisions to accept telemedicine technology.
Gentry and Calantone (2002) used structural equation modelling to test three popular models on behavioural intentions, theory of reasoned action, theory of planned behaviour and technology acceptance model and they concluded that these three model worked in a network context. Technology acceptance model was found superior than the other two models.
MATH (Model of adoption of Technology in household) by Brown and Venkatesh (2005) is another research on the factors influencing household technology adoption using TPB model (TPB; Ajzen 1991) as the framework. They developed a powerful MATH model that accounted for 74% of the variance in intention to adopt a PC compared to 50% for the baseline MATH. Adoption of Personal computer is a complex phenomenon and it was found that though income of a family has an influence on the adoption but it is not the sole driver. Attitudinal beliefs varies by the life cycle stage of a consumer. Age and number of adults in any house have moderating effects on the “Normative Belief” dimension of purchase intention. Workplace shows a minimal impact on purchase except on single parents.  Initial MATH model suggested that utility for children showed a significant impact on PC adoption but the improved MATH model demonstrated that it was not significant unless the life cycle factors were integrated in the model. Fear of technological advances and cost related factors impacted the adoption decision.
A research done by George (2004) has demonstrated the robustness of the TPB in explaining Internet purchasing behaviour. The study investigated the relationships between beliefs about internet privacy and trustworthiness on online purchasing behaviour. Based on the survey of college students it was found that beliefs about trustworthiness positively affect attitudes towards online purchasing behaviour and consequently the behaviour. “Perceived behavioural control” was measured by their beliefs about self-efficacy and it has shown a positive impact on online purchasing behaviour.
Numerous times, TPB model was proven to be effective in predicting behaviour in case of technology adoption. To predict user acceptance of online video and tv services, a study was done by Yann Truong (2009) at France. TPB model was used to understand the antecedents of online video use. Perceived behavioural control showed a greater influence towards the use of online videos whereas the effects of attitudes and subjective norms showed moderate effects on that.
Pelling & White (2009) used well-validated TPB model to predict people’s use of Social Networking sites. The study investigated an extended TPB model which included self-identity and belongingness to assess the psychological variables which predicts young people’s use and engagement with social networking sites. The study on university students reported that high level of social networking sites us is influenced by attitudinal, normative and self-identity factors. Self-identity significantly justified the addictive tendencies of the young people towards social networking sites whereas belongingness showed less influence in the prediction young people’s use of social networking sites.
Liaw(2004) studied the behavioural intention to use search engine as a learning tool using TPB model. Hsu et al (2006) examined the antecedents of users’ intention to continue online shopping using extended TPB model.
Conclusions
Plethora of studies have used Ajzen’s TPB model and extended TPB model to predict adoption and behaviour. Its extensive use in examining determinants of predicting behaviour in various contexts has proven the robustness of the TPB model again and again. Especially TPB model has wide application in predicting adoption and use of online services, online shopping, e-filing, and social media.
Reference