Trend to Watch in Marketing: Internet of Things

Marketing isn’t the same as it used to be. Radical changes have been brought about largely by ‘technology and connectivity’. The evolution of digital technology is fueling disruptive changes in the marketing environment. Yet, this seems to be only the tip of iceberg. The “Internet of Things” (IoT) is rapidly becoming the most familiar expression across business. Despite it being in a nascent stage, scientists see its uses across a wide range of industries. If a firm does not prepare itself now it stands the risk of being left behind by others. This write-up takes a look at the impact IoT will have on marketing.

Interestingly, more so in the present era, continuity is brought about by continuous changes. ‘Marketing is dynamic and is undergoing changes’ is an understatement. It is getting transformed with the evolution of newer technologies and trends. In a study conducted by the Economist Intelligence Unit, it has been found that 80% of 478 high-level marketing executives surveyed globally, say that marketing needs to be restructured to support the business effectively. 29% believe that the need is urgent. The urgency is because today we are in the “second half of the chess board”. The origin of the phrase is credited to Ray Kurzweil, director of engineering at Google, from a story he told about the inventor of chess and the Chinese emperor. When the emperor asked how he wants to be rewarded, the inventor said that he wished to be paid in rice; one grain on the first square, two on the second, four on the third and so on and there are only 64 squares on a chess board. During the first half of the chessboard, the inventor was given spoon of rice, then bowl and then barrels. The magnitude of quantum changed dramatically then onwards. According to the version of the story, the cost of the second half of the chessboard bankrupted the emperor.
According to the Economist’s report, the marketers think that changes will occur in six areas:
1. Marketing will increasingly be seen less as a cost and more as a source of revenue.
2. Marketing will take the lead in the customer experience.
3. Engagement is becoming paramount.
4. The new marketer combines operational and data skills with a grasp of the big picture (and possibly working within a different organisational structure as well)
5. Digital and data dominate investment.
6. Two trends to watch: real-time personalised mobile and the Internet of Things.

As mentioned earlier, IoT is becoming a subject of discussion both in the workplace and elsewhere. Presently, IoT technology and particularly the business models that use IoT are immature and are in infantile stage. However, Gartner, Inc. an American information technology research and advisory firm providing technology related insight forecasts huge benefits and advantages from IoT.
Kevin Ashton, cofounder and executive director of the Auto-ID Center at MIT, first mentioned the Internet of Things in a presentation he made to Procter & Gamble. Here’s how he explains the potential of the Internet of Things:
“Today computers — and, therefore, the Internet — are almost wholly dependent on human beings for information. Nearly all of the roughly 50 petabytes(a petabyte is 1,024 terabytes) of data available on the Internet were first captured and created by human beings by typing, pressing a record button, taking a digital picture or scanning a bar code.
The problem is, people have limited time, attention and accuracy — all of which means they are not very good at capturing data about things in the real world. If we had computers that knew everything there was to know about things — using data they gathered without any help from us — we would be able to track and count everything and greatly reduce waste, loss and cost. We would know when things needed replacing, repairing or recalling and whether they were fresh or past their best.”
In other words, IoT is expected to provide connectivity of “things”; things could be devices, systems, animals and human beings that are embedded with electronics, software, sensors and connectivity to enable exchange of data with other connected things. For example, the things referred can be devices such as heart monitoring implants, biochips, transponders on farm animals, automobiles fitted with sensors and so on. Each of these devices is electronically identifiable through a unique identifier and they can communicate with other things so fitted with sensors and connected through internet.
Gartner estimates that there will be nearly 26 billion devices on the Internet of Things by 2020.[1]
Another estimate by ABI Research is about 30 billion devices will be on Internet of Things by 2020.[2]Whatever the figure may be, it is clear that there will be large number of things that will be connected to internet. For the people interested in the technology – the ‘things’ will have an IP address as the identifier. At present, because of space constraint in IPv4 which accommodates 4.3 billion unique addresses, for full-fledged IoT will have to use IPv6 which can accommodate extremely high number of addresses.[3]  The IoT will mature only when IPv6 is globally adopted in the coming years.[4]

According to Drucker, businesses have only two basic functions, marketing and innovation. Though this is valid for any organization, it is more so for technology-based businesses. Only some understand a greater need for sophisticated marketing for high-tech companies. Customers of new technologies often find it difficult to articulate their needs and understand the specific benefits new technologies can offer . As a result, technology-based companies often find it difficult to develop a competency in working with customers—both on the fuzzy front-end of product development when it is vitally important to solicit customer input . Thus arises an indispensable requirement for the marketers to understand IoT.
The ever increasing capacity to handle huge data and the increasing ability to connect with the embedded devices means that IoT will find applications in wide range of areas.[5]Besides collecting information IoT can also be designed to perform actions. For example, in the field of business and marketing, the system can be designed to monitor specific customer’s purchasing habits. This can be done by tracking their mobile phones. The store where the customer is in could provide him/her with special offer on the products he/she routinely buys. The system may also automatically receive information of the products the customer is running low in his fridge in his house.[6]  The fig-1 shows the possible roadmap for the Internet of Things.
Figure 1 Technology Roadmap: The Internet of Things 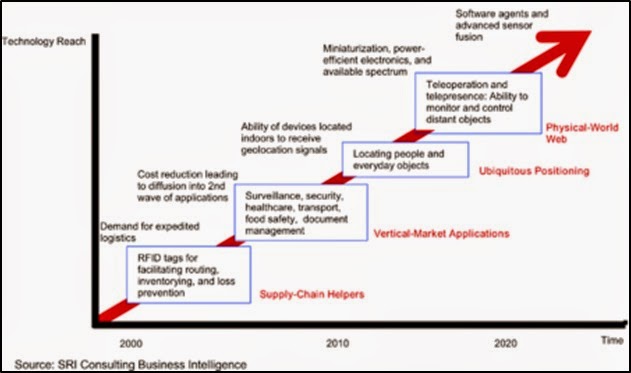 The use of IoT is not confined to the examples given above. IoT has huge potential. Depending on the domain of application, it can be broadly be classified as smart wearable, smart home, smart vehicles, smart city, smart environment and smart enterprise. Fig-2 depicts what something like a smart city can look like [Courtesy Lebelium,].
Figure 2 Depiction of a Smart City 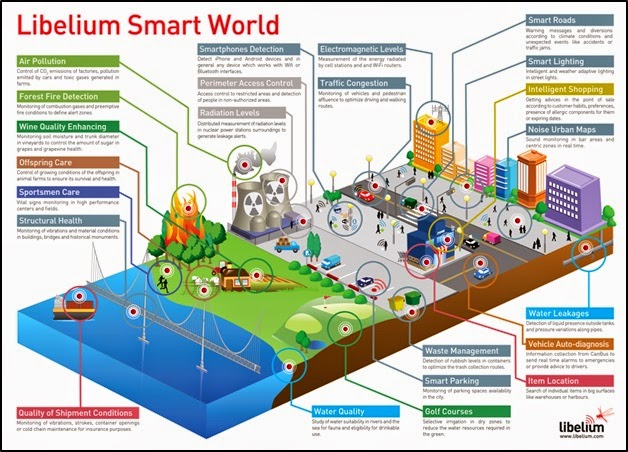 Recently in news was that Electrolux is developing a fridge connected to internet, similar to the example given earlier. Experiments are on for an internet connected lightbulb, door lock, clock, washing machine and ovens. There are also thoughts of designing cars that would communicate with other cars about traffic and street signals that communicate with the cars and accordingly manages signals. Field trails are already on for driverless cars.
The concept of Internet of Things is very thrilling. However, as any phenomenon, there are positive and negative sides. This write-up dwells only on the positive side leaving negative side to be dealt later. However, in order to appreciate this piece of writing, I think it is suffice to mention that the major negativities associated with IoT are peoples’ privacy and data security. In spite of some drawbacks, the potential of IoT is so large that many companies are investing huge amounts into it.  Samsung pledges over $100m to make ‘internet of things’ finally happen.

Amidst the proclamation by the technologists that the Internet of Things is step in the direction of better world, many, justifiably, have serious reservations about the IoT.  Technology influences our moral decision making, which in turn affects human agency, privacy and autonomy – writes Peter-Paul Verbeek, a professor of philosophy at University of Twente, Netherlands. He further adds that viewing technology merely as human tool is dangerous and instead should be considered as an active agent . I end this article by reproducing below the problems highlighted by the report titled “Privacy of Big Data in the Internet of Things Era” by Charith Pereraand et al (:
Problems highlighted by the report include:
·         User consent – somehow, the report says, users need to be able to give informed consent to data collection. Users, however, have limited time and technical knowledge.
·         Freedom of choice – both privacy protections and underlying standards should promote freedom of choice. For example, the study notes, users need a free choice of vendors in their smart homes; and they need the ability to revoke or revise their privacy choices.
·         Anonymity – IoT platforms pay scant attention to user anonymity when transmitting data, the researchers note. Future platforms could, for example, use TOR or similar technologies so that users can’t be too deeply profiled based on the behaviors of their “things”.
***