The Case of a Bold & Beautiful Mutual Fund

The Case of a Bold & Beautiful Mutual Fund

New Age (Non-UTI private sector) Mutual Fund
industry in India is more than 25 years old. The industry is generally measured
in the growth in its AUM.  AUM of mutual
funds industry in India has grown from a meagre INR 65 Crores to INR 841300
Crores in the last 25 years. When the business propositions or market
presentations of the fund houses are analysed over this period, we can deduce –
(1) that mutual funds primarily
relied on the past performance against the benchmark as the key selling point; (2) that NFOs (New Fund Offers) were
promoted aggressively to increase share of wallet of retail investors with each
fund house; (3) that theme-based
funds were launched and promoted with attractive storylines; and (4) that corporate and individual agents
were heavily trained and incentivised to push specific funds. Other than these
the other routes used to promote mutual funds were through investor education
series and seminars, whitelisting of
funds through personal finance magazines & websites and of course, digital
presence through social media.
A noteworthy observation in the marketing efforts
of fund houses as above is that almost every fund house had the same approach.
There was no singular fund house that disrupted the flow and attempted a differentiator.
May be it was due to the fact that mutual funds were meant to be diversified
and hence, from no individual investor a fund house could expect 100% of his
allocation to the latter. Given such an ecosystem, what approach can give a new
entrant into the industry a kick-start? Does it really pay to focus on
traditional marketing model of ‘segmenting, targeting & positioning’? Can
there be a disruptive strategy one could adapt at this juncture, when there are
more than 40 active fund houses in the market offering more than 2000 mutual
fund schemes? It is in this context, this article aims to present the case of a
new fund house PPFAS Mutual Fund
that entered the industry in 2011 and launched their first and only fund – PPFAS
Long Term Value Fund in 2013.

Promoted by the Parag Parikh family (who have been
running a boutique investment advisory firm since 1992, targeting primarily the
HNWI investors) PPFAS Mutual Fund claims its mission is ‘to help clients achieve their long-term financial goals through prudent
fund management’. The fund is run by the fund management team comprising of
three managers, each looking after one segment of investing – equity, debt and
foreign equity.  The AUM of the fund is
close to touching INR 600 Crores as on Feb 2016, while NAV has grown to INR
15.65 between May-2013 to Feb-2016. The fund’s sectoral exposure is skewed
towards Internet & Technology, Banks and Auto Ancillaries. The fund has
generated a CAGR of 17% since its inception. The fund claims to invest based on
value-investing philosophy following a bottom-up approach, i.e., to focus on
individual stocks instead of funnelling down from the macro-economic
indicators. In addition to regular opportunistic investing, fund also attempts
to make money through certain arbitrage opportunities in the market. Exposure to foreign equities through overseas securities, IDRs
and ADRs is an ad-valorem feature of
the fund.

Whether
it’s a conscious strategy or an internalised philosophy, the fund house
glaringly differentiates itself from its peers through its ‘prudent’ approach in managing the fund. And even with a little
research into the fund’s factsheet and the website, one can see that there does
exist a differentiated approach
to everything about this company.

Being bold enough to communicate
what’s rational: A snap from the company’s
website in figure below gives the summary of all its differentiating factors.
The very aspect that, monotony of communication by a typical mutual fund is
broken, in itself establishes this brand at a different level.

“We do not aim to please everyone”: The fund managers say – “Our investment choices are not dictated by
glamourous factors, such as momentum, technical analysis, algorithms etc. We
prefer to stick to age-old metrics like cash flow, low debt etc., while
constructing the portfolio. This is our circle of 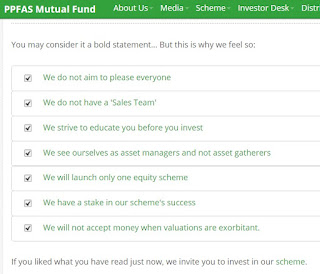 competence and we will never
stay too far from it.” Any security analyst would agree that what works for
stock in the long-run is its intrinsic parameters and operational performance
and the temporal trends, (aka momentum) are meant for speculators.

“We do not have a ‘Sales Team’”:  Following a
relationship manager approach, rather than a sales approach and suggesting that
an investor’s subscription to the fund is the just the beginning of there RMs’
job and not the end, is in itself is a differentiator. Usually, mutual fund
houses will have business development executives, who would go all out to meet
various IFAs, and corporate agents to push for their fund. In this case, PPFAS
stands a little apart. This is also beneficial to the fund house in two other
ways: One, it ensures a long-term loyalty of the investor with the fund house;
Two, this increases the share of wallet of the investor with the fund house.

“We strive to educate you before you invest”: Investor
education initiatives by mutual fund houses so far, have generally been made at
a mass level, and in a way to generate an inroad into the investors’ places.
Whereas, dedicated investor education before every client signs up, is clearly
the most rational thing to do. This establishes a common understanding between
the investors’ expectations and fund’s deliverables. This is the most important
trait for any mutual fund, to avoid redemptions during bear runs (panic selling) and thus hurting even
those who wish to stay.

“We
see ourselves as asset managers and not asset gatherers”:

A direct hit on aggressive promotion of mutual
funds by other fund  houses through heavily incentivized agency model, PPFAS
clearly claims increase in AUM through performance of the invested corpus,
instead of increasing the corpus size by fresh inflow.

“We will launch only one equity scheme”: Whereas fund houses generally have 50 funds (on
an average) spread across different themes, PPFAS dares to have only one fund
and keeps the liberty to allocate between different asset classes, themes and
investing styles within the fund. That is advantageous for the investor as he
need not worry about the asset allocation.

“We have a stake in our scheme’s success”: Inspired by the Hammurabi Code, close to 13% of the
fund’s AUM is held by ”Insiders”  (Sponsor Company, Directors, Key Employees and
other stakeholders). This “SKIN IN THE
GAME” strategy is bound to gain the confidence of investors in a sweep.
This can turn out to be the USP of the fund, as no other fund house has known
to have followed such an approach.

“We will not accept money when valuations are exorbitant”: Rationality states that if there is no
opportunity in the market, there is no point accepting fresh inflows into the
fund. Accepting lump-sum investments during such times and keeping them in
cash, would disadvantage the existing investors’ corpus. There were fund
managers like Kenneth Andrade of IDFC Mutual Fund, who use to subtly follow
this mechanism, keeping this as a policy framework is a great take-home for the
investor.

Unitholders’
Meet: Conducting an AGM
of unitholders’ creates a kind of confidence in investors. The fact that fund
management team meets the investor in itself is a great comfort for a layman
investor. This also gives a feeling that fund management team is proactive in
its communication and accountable in its execution.

‘Tortoise’ as a Brand
Element: The brand logo contains a
tortoise as an element. It is meant to signify longevity, timing, and
timelessness of investment principles.
In conclusion, PPFAS may be
just a mutual fund, not too differentiated in its product. But, it’s for sure
differentiates itself with its value-driven rationalist philosophy. With
increased visibility and consistent delivery of promises, as above, PPFAS can
be a trendsetter in the mutual fund industry. The case of PPFAS will be a treat
for an academician, as it emphasizes the substance
over style.