Introduction
According to a survey carried out at 2009, by Buzz Back
Market research company at NCR, Indian consumers rank highest in the world in
terms of their demand for self-service technologies like ATM, Kiosk, M-commerce
or E-commerce etc. 97% of the respondents said in favour of using SST as
compared to 79% consumers in the US and 77% in the UK. Though the above figures
make us delighted but this snapshot is true only for a very small segment of
the entire Indian population, may be for urban Indians. For more than a decade Indian
service sector has acted as a major force for the growth of Indian economy. As
per 2014-15 FY, the contribution of service sector in Indian GDP is 52% (783
billion US $). It is expected to grow at a rate of 7.4% in FY as compared to
7.3% last year. Both domestic and global factors have an impact on this growth.
Services all over the world have been effectively deploying
technology as an innovative resource to achieve speed, efficiency, cost
reduction, customer convenience and competitive advantage. Self Service
Technology is the ultimate form of consumer involvement in service production using
facilities or systems provided by the service provider.
What is SST (Self Service
Technology)?
SSTs are technological support or interfaces through which
customers can access the services without the help of the service providers or
service employees. One of the most familiar examples of SST is using ATM
(automated teller machine) for various bank transactions. 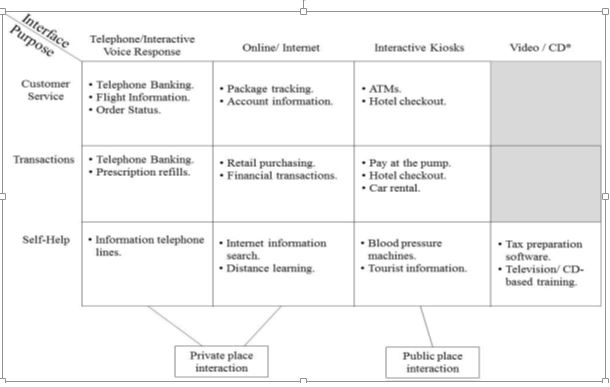