By Prof. Anju Kumar
ISME
Introduction: There
is a huge wave of urbanization, affecting the whole world. Urbanization as we
know is linked to modernization, industrialization and rationalization. Urban
development is a logical coherent system constituting social, economic,
cultural and physical development of cities.
As a consequence of urbanization, global population has increased
tremendously resulting in a huge demand for food and other essentials. This
results in an increase in waste generation. One of the main components of the
waste that is generated is plastic. A lot has been said about plastics and its
detrimental effect on the environment. Imposing a blanket ban on plastics may
not be the answer to the plastics challenge.
Plastics
today are, omnipresent. Be it in packaging, construction, transportation,
healthcare or electronics. They are a combination of low cost, versatility,
durability and high strength to- weight ratio material. Plastic is a material
which is used extensively in the modern world. It is a functional material
offered at a low cost. Plastics are being used twenty fold and their utility is
expected to double in the next twenty years. Today
nearly everyone, everywhere, every day comes into contact with plastics
especially plastic packaging.
Objective: The
objective of this article is to understand the New Plastics Economy and how to
coexist with this indispensible material.
Methodology: This
article is a summary discussion on the Mckinsey report which was brought out
along with the Ellen Macarthur foundation at the World Economic Summit at Davos
in Jan 2016.
Summary Discussion: There
are advantages with plastic packaging. Its barrier properties keep food fresher
longer and its low weight offers lighter transportation costs. As a result,
plastics are being used extensively as packaging material. Between 2000 and 2015, the share of plastic packaging
as a share of global packaging volumes has increased from 17% to 25%. The global
plastic packaging market is growing at a rate of 5% annually. In 2013, the
industry put 78 million tons of plastic packaging on the market, with a total
value of USD 260 billion.
After
a short first-use cycle, 95% of plastic packaging material value, or USD 80–120
billion annually, is lost to the economy. A staggering 32% of plastic packaging
escapes collection systems, producing substantial economic costs by reducing
the productivity of vital natural systems such as the ocean and clogging urban
infrastructure. Plastic is a convenience and cheap material which is consumed
extensively by human beings.
Plastic
in the ocean is a result of people discarding and dumping it after use into the
ocean. For the marine eco system, plastics which are not biodegradable are a
highly polluting material which is a serious threat to the health of the oceans.
Plastic is light in weight and floats and moves around the oceans on account of
the currents in the ocean. Plastics affect the marine life as living organisms
especially the marine mammals, get caught in the plastic nets and other
materials and are unable to come up for air therefore causing havoc to marine
life. Therefore the food chain in the marine ecosystem is affected.
The map below is indicative of the
fact that China and other South East Asian countries cause marine pollution to
a large extent. 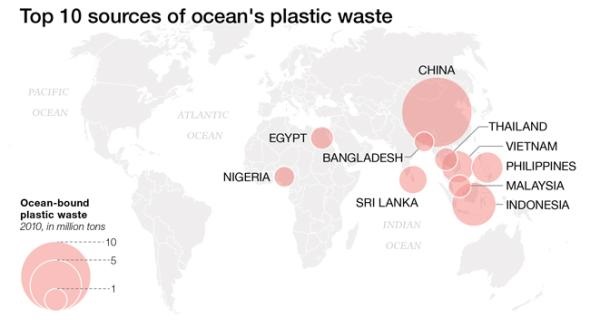 The rankings in this chart reflect
the largest total amounts of plastic waste flowing into the oceans annually,
not the highest per capita amounts. For example, Bangladesh ranks 10th overall,
with 867,879 tons, but 187th per capita, at 346 pounds per person. Denmark ranks
143rd overall with 1,974 tons, but 19th per capita, at 1,883 pounds per person.
NG STAFF; J. L. WANG. SOURCE:
SCIENCE
The New Plastics Economy
offers a vision and a novel way of thinking about plastics as an effective
global material flow, aligned with the principles of the circular economy.
The circular economy is
a generic term for an industrial economy that is producing
no waste and pollution,
by design or intention, and in which material flows are
of two types, biological nutrients,
designed to reenter the biosphere safely,
and technical nutrients, which are designed to circulate at high quality in the
production system without entering the biosphere as well as being restorative
and regenerative by design(Source- Wikipedia)
In the current model, 90% of the plastic packaging
generated is either wasted (40% landfilled; 14%
incinerated; 4% process losses from recycling) or littered/leaked to the environment (32%), leaving a paltry 10% that is ultimately recycled.
There
are three main ambitions captured in the New Plastics Economy. 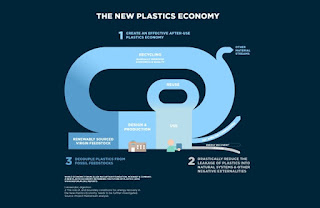 1.
Create an effective after-use
plastics economy
Adopt
reusable packaging. Increase the rate and awareness of recycling. Using
compostable plastic packaging can help to return nutrients of the packaged
content to the soil.
2.
Drastically reduce the leakage of
plastics into natural systems and other negative externalities
Educating
after-use collection and infrastructure and directing innovation investment
towards creating materials and formats that reduce the negative environmental
impact of plastic packaging leakage.
3.
Decouple plastics from fossil feedstock
This could happen through the development of
materials from renewable sources.
There
is a hidden opportunity here which can be used to overcome the drawbacks of a
plastic economy. The plastic innovation engine can be used to take the industry
into a positive value area with stronger economics and better environmental
economics. So, what is the plastic innovation engine? Plastics never become
waste, the goal is to reduce the leakage of plastics into the oceans or natural
systems, and the environment and ensure it is recycled to the maximum extent.
The
raw materials used in plastic production are, cellulose, coal, natural gas,
salt and crude oil (fraction called as naptha). This is known as fossil fuel
based plastic. This non-biodegradable plastic material takes 400-1000 years to
decompose. To sustain the ever depleting fossil fuels, GHG (Green house gas)
based plastic is thought of as an innovation in plastic manufacturing. With a
successful pilot test, this material is awaiting manufacture on a larger scale.
This also contributes to capturing the methane that is released during the
degrading process of plastics. Instead of looking at carbon emission as an
environmental problem, it is used as raw material to create material. The
production commences with capturing methane emitted at landfills, farms, and
the methane thus captured is used as a raw material in the plastic
manufacturing process. This is known as GHG based plastic, which can replace
the non-biodegradable plastic.
Conclusion: A
collaborative approach between all stakeholders across the plastic value chain
is required and this should be a systemic change. The report proposes the
creation of an independent coordinating vehicle to set direction, establish
common standards and systems, overcome fragmentation, and foster innovation
opportunities.
References
World
Economic Forum, Ellen MacArthur Foundation and McKinsey & Company,
The
New Plastics Economy – Rethinking the future of plastics
(2016,
http://www.ellenmacarthurfoundation.org/publications),
Weforum.org
Tags: Faculty Corner, Prof. Anju Kumar