ISME, Bangalore students take it to the streets, for a social cause. 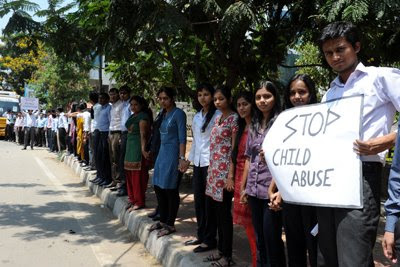 Through a gesture by the ISME, Bangalore students it was once again proved that the society where they live in, matter to them the most. This time it was, in form of a silent protest for the brutal murder of a three month old Neha Afreen and thousands of girls who meet a similar fate in our country.

On 12th April 2012, the HR students of ISME, Bangalore led by Prof. Preeja Sridhar came up with an active awareness programme in the campus which included the students and the faculty forming a human chain, taking it to the streets.

The opening of the programme was through visuals showing shocking statistics about the abuse of girl child in India. It was highlighted that, despite the economic growth, crimes again women have grown perilously high. A role play, done by Deepak and Snigdha, condemned the practice of gender- specific abortion in our country. As the subject of the programme was ‘Prejudice against girl child’, the death of baby Afreen by her father was especially grieved in the moment.

A beautiful display of quotes for saving the girl child was next on the agenda of the programme. Students showed hope and positivity quoting that ‘We believe, that is a love that could fall down like rain and this world is crying for so much more”

An audience opinion was conducted where Dr Swaroop Reddy and Mr. Vivek Garg talked about the present scenario in India about the gender discrimination done even in urban sector of the nation. “Glass ceiling effect in organizations is not very irrelevant to what we are discussing women rights and equality here today.” Prof Ramesh G.Tagat contributed. He gave examples from his own life stating that how high is the position of woman in his eyes, giving ultimate tribute to his mother calling her a goddess to worship.

The students interacted, giving their views on the problems of our legal system today that is lax in punishing the culprits who engage in criminal activities in the cover of rites and traditions of their communities. It was discussed that why, despite all the laws and programs to support the girl child, India still remains a country, with one of the most hostile attitude towards women.

“The guilty must be given exemplary punishment, but society cannot escape responsibility. Our silence and refusal to confront gender prejudice is the main problem today” says an outraged student.

The programme was concluded with a minute of silence for mourning the death of baby Afreen and praying for her grieved family. There was a silent walk in the streets, forming a human chain by the ISME family that went beyond expressing an outrage over the death of Afreen to ensuring that no other girl has to die the way she did.