Is technology taking away jobs?

– Anshu Sharma
Introduction
Technology is changing the world around us at a very fast pace. The fourth industrial revolution is without doubt the most talked about phenomenon not just in corporate boardrooms, but in the academic world as well. There is an unending debate going on, on whether this technology led evolution will lead to increase in jobs or will it take away jobs.
One school of thought believes that technology is taking away jobs from people, while the other school of thought is that technology will result in a net increase in jobs. There are tenable arguments on both sides.
Pessimist School of Thought
A popular joke used to do the rounds in the 1990s:
Question: Who is the most important individual at a wedding?
Some would say, bride, some might say the groom, or their parents, etcetera.
The correct answer? The wedding photographer! You needed to keep him in your good books,
if you wanted to look good in the wedding pictures.
Does this hold true today? Probably not. Mobile cameras of today will even put an advanced DSLR to shame. In-fact we all have become pocket photographers and selfies are the order of the day.
Rapid advancement in affordable technology has led to many a jobs becoming obsolete. The erstwhile ubiquitous postman is hardly to be seen these days, thanks to the email & instant messaging revolution. The humble bank cashier had given place to ATMs and internet banking long ago. Even these are now being upped by the advent of digital payments through payment wallets and m-banks. Travel agents who used to help us plan our travel, have been replaced with the likes of booking.com, makemytrip.com, yatra.com and many more such online travel aggregators. The vibrant fellow at the nearest movie and music CD shop used to be our go-to guy for our entertainment needs not more than a decade ago. However today if you’re looking for some entertainment, you have a plethora of apps, quite literally at your fingertips, to choose from – YouTube, Netflix, prime video, Wynk, saavn just to name a few.
As they say, this is just the tip of the iceberg. There are many more such jobs which have been washed away by this wave of technology. Many of them we won’t even know about, because those jobs existed in the background which we as consumers never go to see. Skilled welders and many other manufacturing jobs were lost to efficient automation. As per a WEF report, nearly 50% of companies expect that automation will lead to some reduction in their full-time workforce by 2022. Various clerical and admin jobs have been lost to the advanced management information systems. It’ll be wrong to say that only blue collar jobs lower in the hierarchy pyramid are being lost. Technologies such as artificial intelligence and robotic process automation have now started to bite into the white-collar middle management as well.
To summarize, this school of thought believes that many more such jobs will be lost to technology and thus we should somehow reign in this tsunami in the larger interest of the society.
Optimistic School of Thought
This school of thoughts counters the above argument to say that while jobs are being lost, new jobs are being created. There are examples of many such jobs which have come to fore as a result of changes led by technology. Jobs such as Social Media Manager, Data Scientist, App Developers, Delivery Agents, and Content Marketers were unheard of a decade ago. Data led jobs are revolutionizing the Indian job market. Social media and Internet of things has led to unprecedented increase in the quantum of data that is available today. This has led to a plethora of jobs in data management and analytics. As per an estimate data led jobs saw a 45% increase as against last year. Close to 97,000 jobs related to analytics and data are vacant as of today in reputed companies such as Accenture, Amazon, KPMG, Dell, Deloitte, and E&Y. As per a World Economic Forum (WEF) 2018 estimate, by 2022 62% of information and data processing tasks will be performed by machines compared to 46% today.
E-commerce is another outcome of the technology revolution. The number of ecommerce delivery workers in India is close to 200,000 led by giants such as Amazon and Flipkart. Uber and Ola combined have in excess of 900,000 drivers in India. Swiggy, a mobile based food delivery start-up, has 55,000 delivery partners across 15 cities in India. Similarly, Zomato has close to 50,000 delivery partners.
According to a Gartner estimate, more jobs will be created than lost by automation. A Gartner estimate says that while 1.8 million jobs will be eliminated by 2020, 2.3 million new jobs will be created. As per a Mckinsey report, by 2030 75 million to 375 million (3 to 14 percent of global workforce) will need to re-skill themselves and switch occupational categories.
In short, this school of thought believes that repetitive and unskilled jobs might be lost with the advent of technology. However, new jobs will be created as a result. The net result will be an increase in number of jobs as technology enabled businesses will become more efficient in their functioning.
Conclusion
It can be fairly concluded that technology is not reducing jobs, but it is leading to a churn where old jobs are being replaced by the new. The WEF’s Future of Jobs report (2018) talks about examples of jobs which are redundant and new roles which have been created due to technology evolution. There is a clear pattern of a technology led churn in these jobs. 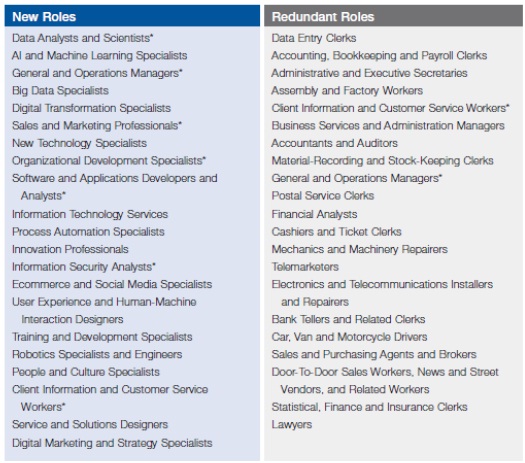 This churn is pointing us towards the changing spectrum of skills required to be effective in these new jobs. The WEF report also illustrates how the skill spect
rum is evolving with this technology led churn in jobs. Most of the job skills relevant today may not be in much vogue 20 years from now. WEF lists the following as the skills for 2022 which are trending as against those which are on a decline due to this churn in type of jobs.

The human machine interface is increasingly moving in favour of the machine, thus changing the skill spectrum for jobs of future. As a result, the trending skills are those which are either supporting this increasing role of technology or those skills which are largely human in nature and have not been yet breached by technology. Top trending skills are focusing around the core human faculties – thinking, creativity, analysis, problem solving and leadership.
This is an important aspect especially for academia to ponder on while designing their course curriculum and skill development programs, with an intent to prepare students for jobs of the future.
REFERENCES
 https://www.glassdoor.com/blog/jobs-that-didnt-exist-15-years-ago/
 https://www.statista.com/statistics/690856/number-of-ola-and-uber-drivers-in-india/
 https://economictimes.indiatimes.com/small-biz/startups/newsbuzz/zomato-swiggyand-
ubereats-paying-higher-cash-on-delivery/articleshow/65142563.cms
 https://economictimes.indiatimes.com/industry/services/retail/ecommercecompanies-
plan-to-double-or-triple-fleet-of-deliveryagents/
articleshow/63651675.cms
 https://www.thehindubusinessline.com/economy/97000-analytics-data-science-jobsvacant-
in-india-study/article26399660.ece
 https://www.analyticsindiamag.com/study-analytics-and-data-science-jobs-in-india-
2019-by-great-learning-aim/
 https://www.mbauniverse.com/group-discussion/topic/business-economy/impact-oftechnology-
on-jobs
 http://www3.weforum.org/docs/WEF_Future_of_Jobs_2018.pdf
DISCLAIMER: The views, opinions and content on this blog are solely those of the authors.
ISME does not take responsibility of content which are plagiarised or not quoted.