‘Innovation Day’- the Cult of the GeneXt 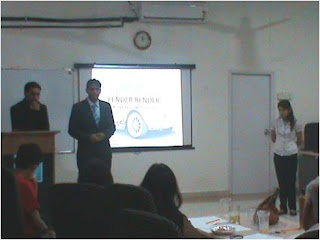 Well, the day can be divided into two parts or rather, it actually was: one was about the ‘product innovations’ and another, the more freaky ‘Theme Fest’.

First let’s talk about the ‘mind-busters’; and the name given has its own significance. To prove my point over here, I would say that as the day approached, all the new products we came up with, were already there, either operating in some corner of the world or beaten down to ashes in another. And thus, we came to know about a plethora of new products we were not aware of: for instance, an electrical cigarette that tastes the same without any health hazards and that too, immortal.

Students came up with exciting ideas like packed coconut water, sound-blocking ear-plugs, etc- A pollution of Ideas. We also made some funny promotional ads. Some even distributed brochures and pamphlets: it was an actual new venture presentation. The teams were brainstormed and the debates that emerged were totally worth it: grilling and informative at the same time. We had jury members from outside the campus for the first time which was in itself overwhelming. 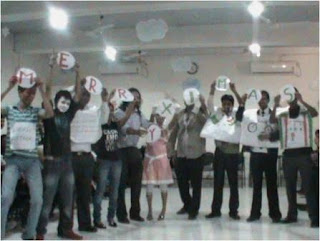 And now, the second part: ‘The Theme Fest’. To be precise, there were four themes: JUNGLE, PAINT, PAPER, PLASTIC. We were painted and adorned according to different ideas: some funny and some with messages. We had Kkrish, we had ZooZoos, we had Aborigines, we had paper–n-plastic fashion shows etc. All-in-all it was grandeur and nostalgic: “hamare pyaare school dayz”- and you can take my word for it. Alas! You were not there.

The author of this article is Shubham Tayal – Student ISME, Navi Mumbai