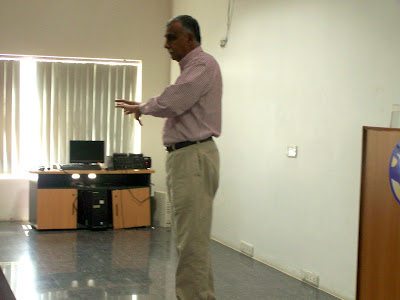 The students of ISME – Bangalore had the great honor to have Mr. Ram S Ramanathan as a Guest Speaker for the topic Entrepreneurship.

Mr. Ramanathan has worked with many Multinational Companies starting from where he has been an advisor, consultant and a strategist not only in India but also abroad. This was before he became a strong entrepreneur and a venture capitalist ever since 1999, investing more than 3 million US $ in business verticals like IT and InfoCom. He has also been an advisor to many of the South Asian governments. He is also a Coach and a startup mentor for many companies.

Mr.Ramnathan started by first clearing out the myths that students had in their minds when it came to entrepreneurship. He said any one can become the CEO of a company as soon as he becomes an entrepreneur. We discussed in detail on how we could start up our venture focusing mainly on having a strong team of people with different expertise and having an exceptional synergy. He briefly told students on the upcoming industry trends and where a person can think of exploring an opportunity.

Mr.Ramanathan made us believe that Capital is never a limitation to start business or to become an entrepreneur and most importantly,ideas of any kind should be grounded to reality.