“We tend to overestimate the effect of a technology in the short run and overestimate the effect in the long run” – Amara’s Law
FinTech is the catchphrase in the financial markets and financial services industry across the globe. It’s been sounded in various financial media as something that’s going to affect the industry as a whole, especially the industry practitioners worrying about their own career prospects. This article attempts to discuss few major trendy areas of FinTech, while giving a brief about the same. Before discussing the areas, it may be useful to know the growth of FinTech:

The Evolution of FinTech?

FinTech, a short form of the phrase Financial Technology can be referred to the use of technology to deliver financial solutions. FinTech has evolved in three stages: The first which can be called FinTech 1.0 occurred from 1866 to 1967, when the financial services industry remained largely private despite being heavily interlinked with technology. The next period FinTech 2.0, extended from 1968 to 2008, an era characterised by the development of digital technology for communications and transactions and thus the growing digitisation of finance. Since 2009, in the period of FinTech 3.0, new start-ups and established technology, ecommerce, and social media companies have begun to deliver financial products and services directly to the public as to businesses, including banks.

The long standing marriage of technology and finance has been continuously evolving, FinTech today exhibits great promise in both emerging and economies, where several underlying factors – rising smartphone penetration, inefficient traditional financial systems, and behavioural shifts among consumers – present fertile ground or FinTech development, and developed economies, where current investment in FinTech is increasing at a staggering price. In the near future, regulators will come under increasing pressure to adapt to the newly fragmented market comprising major banks, established tech firms, and lean start-ups.

Last one decade FinTech has moved largely from being a small industry in the IT corridors toa fastest growing sectors in the IT sector at a global level. A study by The NewYork Times in April 2016 has listed the top players in different types of FinTech Companies. The same is re-presented below: 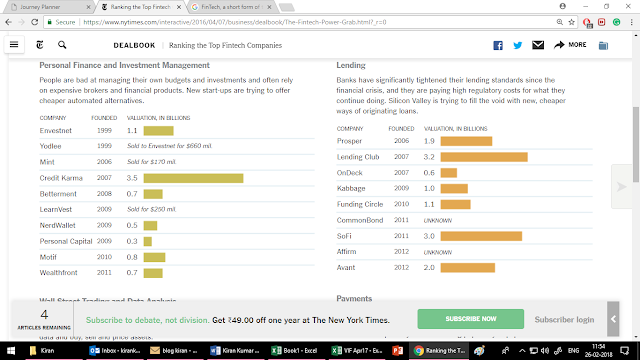 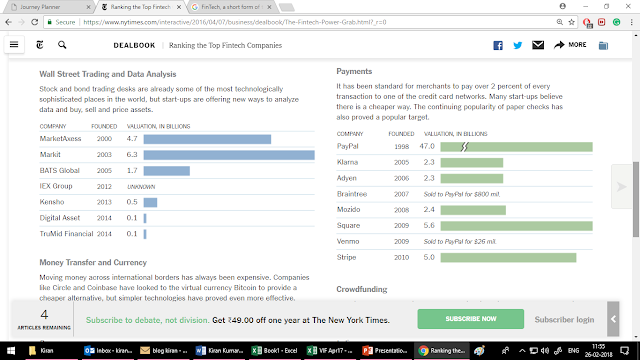 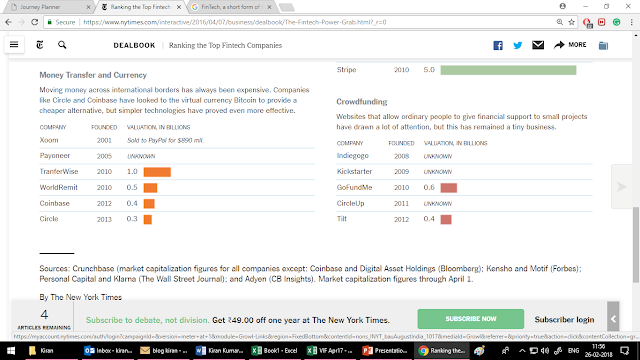 Below we discuss different fields within the financial arm, where technology is driving the new business models:

Robo-advisers are online platforms that allow investors to receive relatively basic financial advice and purchase various investment products on the basis of that advice. The unique selling proposition of robo-advisers is the low fees they are able to charge by automating the financial advice process.

Machine learning is a technique that researchers, and now firms, have begun using to design more intelligent computer systems. The advantage of this approach is that instead of attempting to hardcode a computer with all the possible scenarios and actions a machine may encounter when trying to perform a certain task, machine learning allows the computer to “learn” the necessary relationships and actions involved in completing a task intelligently. This “training” involves using a large training data set that the computer algorithm can repeatedly go through (but typically with guidance and supervision) to learn through trial and error how to connect the input data (e.g., credit history, employment history, assets, purchasing history) with the desired output (e.g., the correct identification of a suitable risky portfolio). Once this is learned, the algorithm can be used on real-world data with surprisingly good (in some cases) results.

The most popular approach to machine learning is through the use of neural networks, which are computer algorithms designed to mimic the way we believe the brain processes information. The networks are created by connecting millions, if not billions, of artificial neurons (essentially input/output switches) in all possible combinations. Through the process of machine learning (i.e., supervised trial and error), certain connections are strengthened, others weakened, and some removed until the correct network of switches and connections is left that can accept an input and identify the correct output.
The input data that can be fed into neural networks has only the restriction that it must somehow be converted into 1s and 0s that are palatable to computer. In the world of FinTech, common use cases for machine learning algorithms are credit scoring models for FinTech credit companies (e.g., marketplace lending or peer-to-peer lenders) and robo-advisers. In the former, hundreds of input parameters about the individual (including, in some cases, Facebook and Twitter usage) are fed into a neural network that attempts to find patterns that are unobservable to humans but are nevertheless correlated with creditworthiness. It should be noted that whether these types of neural networks really work has yet to be tested by a full credit cycle. In the case of robo-advisers, similar input parameters about the individual investors are considered by a neural network designed to assess suitability, risk tolerance, and appetite. Alpha-generating algorithms are a separate angle in which machine learning is being developed in the field of investment management.

At its most basic, an algorithm is “a sequence of steps to achieve a goal”. Algorithmic trading is “using a computer to automate a trading strategy”. In almost all cases, algorithms encode what traders can do by watching the market and manually placing orders. But, the time it takes for a trader to take information, decide on a trade, and enter a trade, algorithms can make and execute thousands of trading decisions. There are two types of trading algorithms: (1) Execution Algorithms – They are used to break down large orders and execute
them over a period of time. They include algorithms like volume-weighted average price (VWAP), implementations shortfall and market participation algorithms; (2) High-Frequency Trading Algorithms – Where high frequency refers to the tracking of high frequency streams of data (such as market data feeds or news feeds), making decisions based on patterns in those data that indicate possible trading opportunities, and automatically placing and managing orders to capitalise on those opportunities. A commonly associated term with HF is “statistical  arbitrage” or simply “stat arb”, which mnitor instruments that are known to be statistically correlated with the goal of detecting breaks in the correlation that indicate trading opportunities. Different types of stat arb HFT trading algorithms include (1) Pairs Trading; (2) Index Arbitrage; (3) Basket Trading; (4) Spread Trading; (5) Mean Reversion; (6) Delta Neutral Strategies etc.
HFTs are despite being glamorous, also pose challenges to the overall market. A study done is US found that during 2014, there were two distinct strategies in operation – passive HFTs that provided market making activity during the event window while aggressive HFTs traded in the direction of price moves and accounted for bulk of the observed trading imbalances on the way down and on the way up. HFTs is here to stay. It seems to unlikely that it will be possible or desirable to reconstruct the market in a fundamentally different way.

Peer-to-Peer (P2P) lending is a form of direct lending between lenders and borrowers. In a aP2P transaction, money can flow from the lenders directly to borrowers through the P2P platform, bypassing the traditional banking channel. As such, it is considered generally a disruptive form of FinTech. Lu.com, for example, is one of the largest players in the P2P market. P2P is the end-to-end linkage online between a borrower and an investor, taking out intermediaries. The potential for this market differs from location to location and right now it is found to be more attractive opportunity for start-ups in countries like China, India and Indonesia, for two reasons: (1) there is huge demand for retail borrowing and retail investing; (2) Banks are not showing interest in getting into this business model, due to unattractive margins.

Mobile payments at global level are not really hottest area in FinTech, but, the largest FinTech Company in terms of valuation is a payment company. Of all the new FinTech uses, obile payment is arguably the one in which traditional financial institutions have lost the most share. To understand the construct of this, we need to look at the traditional payment mechanism.  Basic payment transaction begins with a consumer using his card to pay for a product or service at a merchant. The payment then gets transferred from the issuing bank – the bank that issued the card to the consumer – to the merchant’s account at the acquiring bank via the card’s payment network. Mobile payment companies have radically changed these dynamics. Alibaba and Tencent, the tech giants behind Alipay and WeChat Pay, respectively, have gone even further and started their own banks.

RegTech short form for phrase Regulatory and Technology. RegTech is an interesting application of FinTech that could help firms manage their monitoring, disclosure, reporting, and risk management requirements more efficiently and effectively. RegTech may also allow regulators, investors and other market participants, a greater visibility over businesses and market data.

The ABC of the future, AI models, big-data techniques and the cloud-computing services necessary to implement them have combined in a perfect storm in the past few years, driving the long promised AI revolution forward. Financial Services industry will be using the applications of the above in the areas of robo-advisers, credit-scoring and data cleaning.

While the objective of this article is not to debate any aspect relating to the theme of FinTech, we can say that FinTech is in itself has become an industry now. So much so that debates have started if these are going to ma
ke may finance professions useless. In summary, we can say despite the disruption talk, FinTech is most successful in regions and areas of finance that are unserved or underserved by the financial services industry. Financial services industry leaders and technology innovatorshave begun to realisehtat the best way forward is collaboration. And Amara’s Law mentioned at the beginning of this article is an accurate depiction of the FinTech evolution today.

Various articles & books from Insights & Learnings of CFA Institute USA (Link: https://www.cfainstitute.org/learning/tools/topics/Pages/fintech.aspx)
Author is Faculty in Finance at
International School of Management
Excellence (ISME), Bangalore.
He can be reached at kirankvk@isme.in