When books reach every hut… 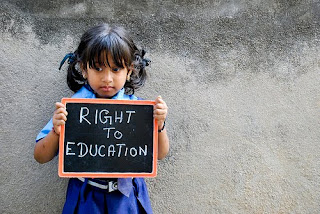 Now the right to education act has got life. The Supreme Court underlined the need of RTE (right to education) and the reservation of 25% of the seats for poor children without taking their other back grounds in account. The apex court has given wings for the 2005-born act to fly and make the class room opened for the underprivileged young buds of the country. It is known that around eight million children between the ages 6-14 are unable to access education. There could be many reasons, but among the vague it is clear that money plays the villain role in zillion cases. Our education system still holds many obsolete laws and norms and at the same time the system is getting revolutionary add-on like RTE, which is absolutely fair.

Frame work for reservations had done brilliant jobs for the lower casts by uplifting their educational status and many related traits. But the same frame work had transformed into a confusing web when authority started manipulating the frame for their own needs. The Supreme Court endorsement for the act has shown the way to nation building on a strong and vital foundation-the education. The first act which came into force through a speech by Prime Minister may face lot of challenges during implementation. The same had won the court battle against a few such challenges, but still the motion happens. The some of the hefty challenges would be lack of teaching staffs, lack of schools under the arm of government and also lack of infrastructure in the schools which is undertaken by government.

As education comes under the purview of states, it won’t be an easy task for the central to fix the nuts and bolts. The raising of fund for the purpose is another important matter. The Hindu reports that for implementing RTE within five years, the government needs four lakh crore Indian rupees. That is a huge amount and let us hope the often heard phrase “economy blooms” would help the authority to find the fund. The special treat for all the states is that the centre government has agreed for a ratio of 65% to 35% i.e. central would take care of 65% of the total investment. The need of one million teachers and the facilitation to train those innumerous teachers also would seek a herculean task from the authority. Those things should happen shortly for a fully polished RTE, but still the system could provide a large sum of poor children with basic education utilizing the government and other private schools. The ambit of law had covered all schools except private institutions undertaken by minority. The exceptions at this stage only help to turn the scene fishy.

Even though the Article 21A of the Indian constitution makes our country among the list of 135 countries on the globe for making education as one of the fundamental rights, the quality of the education for those reserved category still sticks on a question mark. The careful steps by the government and association with private arms would help to improve the quality to a great extend. We all have been hearing that India is a young county flooded with lot of talents. That may be true, but India can’t be young all the time and time rolls. We should ensure that our kids-the future of our land are being treated well, with all facilities and environment that nourishes thus keeping India young and talented.