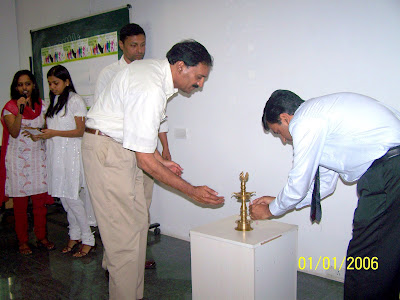 On 11th Feb 2012, there was NEN pledge taking function in ISME Bangalore, where the day started with the lighting of the diya, by Professor Nitin Garg and the faculty. It was followed by a brief introduction of NEN, the biggest entrepreneurship network in India. The main focus was on, directing the students to a whole new idea of creating a job, rather than than looking for one.

The main event for the day was the pledge taking, where the students resolved that “We can and we will”. Professor Nitin Garg, himself being an excellent example of an entrepreneur, for the students talked about his experiences and shared his views through a video of Business Legend Mr. Sunil Mittal of Bharti Airtel. He talked about the two types of entrepreneurship i.e. need based and opportunity based. He made students realise the importance of opportunity based entrepreneurship today.

Mr. Sunil from NEN too, talked passionately about entrepreneurship and called it “intoxicating” for him. His pep talk with the students invited many questions and this led to a very interactive session. Advertisements were next on the agenda, which showed the commercial campaigns of NEN and Coca Cola and later NEN posters and message board was also signed by the faculty and the students.

The whole programme was concluded with the screening of the movie ‘October Sky’, an inspirational film that spoke about determination, will power and finding your dreams.