“HOLACRACY – An out of Box Approach to Governance”

Holacracy is an outcome of LEAN and AGILE ,it is a social technology or system of organizational governance in which authority and decision-making are distributed throughout a holacracy of self-organizing teams rather than being vested in a management hierarchy.

“Holacracy, which originated with a former software company founder turned consultant named Brian Robertson, eliminates formal job titles, managers, and traditional hierarchy in favour of a series of overlapping “circles” where people can have several different roles” (source:www.CNBC.com)
It is a technique for empowering the employees in the organization.,.Holacracy is not a model, idea, or theory. Holacracy is a practice. Holacracy explores a new tier of organization and culture only recently available to us, and so it is a new practice, one still emerging, and one which takes us into territory still largely unexplored. Roles in Holacracy hold multiple related accountabilities in a cohesive container. There are no title traps in Holacracy. With the detailed accountabilities used in Holacracy, any given role may have dozens of accountabilities, and any given individual may fill multiple roles.

It helps in filling Roles, whenever a new role is defined, it is then assigned to a member of the organization to fill and execute. This formally gives that member control to do what is needed to enact the accountabilities of the role, within any defined limits (accountability always goes with control). It also gives others in the organization the reasonable expectation that they can ask the individual to account for any of the role’s explicit accountabilities.

It differentiates Role with souls, Holacracy’s approach focuses on clearly differentiating individuals from the roles they fill. An amazing thing happens as we begin this process – we are able to understand and honour each more fully, integrate the two more effectively, and directly help both person and role evolve.

The goal is to increase the level of accountability, since employees are held accountable by all their coworkers rather than a single manager, as well as transparency in order to quickly and publicly resolve sources of tension.
Organisational Structures in Holacracy are:

1. Circle Organization
A “circle” in Holacracy is a self-organizing team. Each circle has an aim (purpose), and the authority to define and assign its own roles and accountabilities. some circles are focused on implementing specific projects, others on managing a department, and others on overall business operations. Whatever the circle’s level of scale, the same basic rules apply. Each circle is a Holon – a whole self-organizing entity in its own right, and a part of a larger circle; for example, a whole project team circle may also be a part of a department circle. 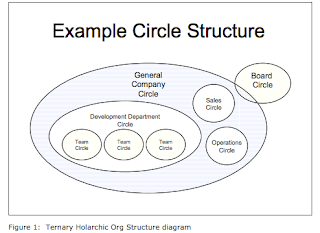 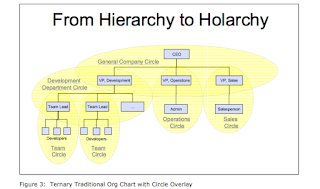 The other half of the double link is appointed by a sub-circle to connect to its super-circle. This is called a “Representative Link” role in Holacracy, or “Rep Link” for short – like the Lead Link, the Rep Link forms part of the membrane between two circles. The role itself is quite different from anything we’re used to in a modern organization, although it bears some similarity to a Lead Link (but in the opposite direction). A Rep Link is accountable for ensuring the super-circle is a conducive environment for the sub-circle, by carrying key perspectives from the sub-circle to the super-circle’s governance and operations. 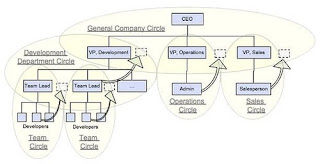 Among the most fundamental paradigm shifts in Holacracy is its approach to maintaining organizational control.

Holacracy incorporates dynamism in the organisation , this  includes significant efficiency gains, higher quality, more agility, increased ability to capitalize on ideas and changing market conditions, and, perhaps most ironically, far more control. And the dynamic approach achieves these business benefits while meeting human and social needs at a level far beyond the traditional approach.

Integrating future possibilities into present decision-making , if both the probability of a costly possibility arising is uncomfortably high.

Holacracy helps in speed and demands of modern organizational life, it helps to integrate the key perspectives of others. An integrated state is achieved, when each member of the circle making the decision sees no “objection” to proceeding with the proposed decision.

HOLACRACY IN THE WORLD

The Role of the Board

To discuss the connection between a single organization and the broader world, we first need to discuss the unique purpose of a “Board Circle”, Holacracy’s version of a more traditional Board of Directors. Each individual organization has a board circle at the outside edge of its holarchy. A board circle looks like other circles in most respects – it holds governance meetings using integrative decision-making, and it is doubly-linked to the single broadest “normal” circle within the organization. The CEO is the lead link from the board to the general circle, and a rep is elected from the general circle to the board.

A company is a semi-autonomous Holon, just like all the sub-holons within the company (departments, project teams, etc.). For a holarchy to remain healthy, all holons need clear autonomy as a whole, and clear responsibilities as a part or member of something larger. Our current organizational and governance systems are setup in ways that push towards this unhealthy agency – it is extremely difficult to work against this momentum in the current model, or even become fully awake to it.

The We of Organization

Towards a Sustainable World

Looking forward, as this web of organization grows, it can provide a distributed yet integrated capacity to govern our shared resources and move us towards a more global communion. It radically transforms governance from something that happens on a “big” scale.

Why Holacracy is not welcomed in Indian Society:

Indian Corporate system is bound by hierarchy and is driven by Goals and Objectives more than the performance. compliance has just started in the system, but it’s a long way to go ….

Indian system believes in directing rather than empowering, that’s why holacracy is not one of the popular practices in India.

Reporting system and urge to control is so high in Indian Management system that it’s difficult for the mangers and the CEOs to even think of let go of their powers.

Because of Failure of Empowerment and empowering teams in our system, Holacracy can be a difficult process to follow on.

Conclusion:
Organizations currently practicing Holacracy are supporting this fledgling movement as best they can, and looking for others interested in getting involved and contributing as well.
Bibliography: