CROWDFUNDING AS A VIABLE FINANCING OPTION FOR MSMEs

Crowdfunding is a source of mobilizing funds from the general public through the internet or by making use of social media.  It is a very popular medium of fundraising for business as well as for social causes due to the increasing penetration of technology into our day to day lives. It allows a large group of people to replace banks or other financial institutions and makes finance accessible to those who find it difficult to raise it via such formal channels. It not only helps in raising funds, but most of the time validates the ideas or innovations of the person or firm raising it. In India, the concept of crowdfunding is still in its nascent stage, and in this backdrop, its future scope is huge. When we speak of crowdfunding in India, it’s the contribution towards social causes which always comes first as that is the general trend that has been observed in the Indian crowdfunding platforms. But when we speak of the scope of crowdfunding in business, MSMEs are the sectors that can never be avoided as they form the backbone of the Indian industrial sector. When I say that MSMEs form the backbone of any economy, it needs to get validated. So let me take you through a few facts and figures.

Micro, Small & Medium Enterprises- what are MSMEs and why are they important

Based on the seed capital and the investments in plant and machinery, the MSMED Act in India classifies the MSMEs as under:

As per the National Sample Survey 73rd round, conducted by the National Sample Survey Office, MoSPI, during the period 2015-16, there were 633.88 lakh unincorporated non-agricultural MSMEs in the country engaged in different economic activities and they had been creating 1109 lakh jobs (360.41 lakhs in Manufacturing, 387.18 lakhs in Trade and 362.22 lakhs in Other services & 0.07 lakh in Non-captive Electricity Generation & Transmission) in the rural and urban areas across the country.

The MSME sector in India also contributes to around 40% or more than that of the country’s total exports.

Having said that, this is one of those sectors which has got hit in the worst manner during the pandemic and the situations were not very great even before that. That is a lot of challenges that MSME in India face and to list a few of them:

One might be wondering why “funding” has been bolded. If we try to connect the dots, all the above-mentioned challenges come due to the lack of enough funds only and so one is forced to believe that funding is the major hindrance in the efficient functioning of MSMEs in our country.
Why Funding is a major issue for MSMEs in India???
Let us have a closer look at the sources of financing available for MSMEs in our country: 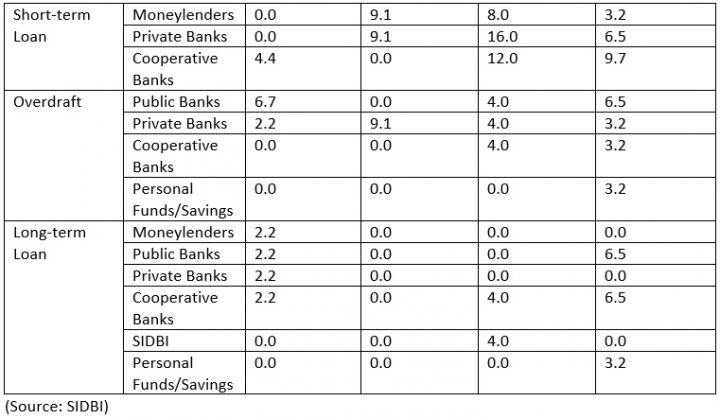 The above table released in a source of SIDBI indicates that the major source of funding in MSMEs remains to be informal channels, like friends, relatives, own savings, or private lenders. According to a report of BizFund (Financial Express dated 3rd March 2020), only 16% of MSMEs have access to formal credit leaving more than 80% of these companies under-financed or financed through informal sources, making it difficult for them to address the accumulated debt arising out of highly expensive informal sources of funding. The World Bank estimates that the credit gap of MSMEs in India stands at an enormous $380 billion. Although there are a lot of government schemes and budget allocation happening every year to boost up this sector, the result seems to be nothing less than zero as either it never reaches the needy or they are never aware of the benefits available to them. This is where I expect crowdfunding has got a major role to play.

How Crowdfunding can come to the rescue?

This is typically how the graph of business moves in through its lifecycle. And the first phase, ie, the starting stage is the phase where MSMEs find it most difficult to raise funds followed by the growth stage. Crowdfunding is a platform where great ideas are always rewarded with great funding. Close to 200 companies have raised INR 35,057,840- INR 45,074,366 on these platforms over the past 18 months as per a September 2016 report, which is very less compared to the highest transaction value reached by China of $5,572 mn. (https://www.investindia.gov.in/team-india-blogs/crowdfunding-india-0). While the US, UK & China together contribute to around 96% of crowdfunding investments across the globe, India is still at a nascent stage in this regard. A few thoughts on how to use these platforms would be:

Since equity funding is illegal in India unlike US and China and debt-funding is also restricted only for licensed NBFCs, the other acceptable forms of crowdfunding like product-based or reward-based crowdfunding or P2P model can be used by the MSMEs to pitch their product prototype or idea to a larger group of investors at the initial stage. The benefit of this would be, if the idea or the prototype gets greater acceptance and funding, it will be an incentive to get easy funding at the later stages of start-up or growth through the formalized channels and would also allow the MSMEs to advertise their business ideas properly to get good funding.
Recently, an initiative named “Keep the Light On” has been launched to help small businesses in the US to get money through crowdfunding and there is an online platform called “MAGNiTT”, an online platform in the US, which again helps small businesses and start-ups to connect with investors and interact with potential mentors to support them in the growth of the business. Although we have platforms like “Headstart Foundation” in India, which aims at helping early-stage startups to get funding and mentoring, a similar platform is nor available, neither accessible for MSMEs. An initiative similar to “Keep the Light On” will make it easier for MSMEs to raise funds via crowdfunding platforms
The vast majority of crowdfunding platforms in India are concentrating on social issues, funding creative projects, and so on. Although a few like Fundable and Catapoolt are projected as crowdfunding platforms for startups and small businesses, if we look at their funding patterns in the last few years, the stress was on technology innovations and social causes. The need of the hour is to have at least a few dedicated crowdfunding platforms which cater only to the need of small businesses and start-ups without diluting their purpose of existence.

A sector like MSME, which contributes to the vast majority of the nation’s economy in terms of GDP contribution, employment generation, and export contribution, cannot survive the test of the time just by the efforts of its owners or the investors and mentors. An equal push is required from the part of the government as well. When the government incentives and schemes are not serving its purpose, there should be some sort of alternative options. Recently, the US government enhanced the limit of fundraising through crowdfunding platforms without providing reviewed financials for small businesses from $1,07,000 to $2,50,000 in response to COVID-19. This has been a major push to the small entrepreneurs there as they can now raise a greater amount through crowdfunding platforms just by providing a self-certified financial document of their business. A company called “Transparentbusiness.com”, a women-entrepreneurship based in the US, raised $6.1 mn through a pre-IPO stock option when its founder decided not to approach VC funding due to their negligence towards women entrepreneurs in the past. It might take years to imagine similar funding models getting implemented in India. But with the release of the latest working paper on crowdfunding by GoI, there is a ray of hope and one can imagine that at least at some point shortly, equity crowdfunding, pre-IPO stock investments, etc will gain momentum in the country.

Disclaimer: The views, opinions, and content on this blog are solely those of the authors. ISME does not take responsibility for the content which are plagiarized or not quoted